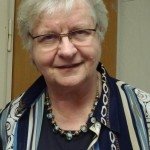 Hanne Braun looks back on her lifetime experience with the YWCA: In 1952, as a ten year old girl, I heard about the YWCA. The head office of the Protestant Girls’ Work based at the Burckardthaus in Berlin reported about Ruth van Hoogevest of the World YWCA in Geneva and her work with German refugees. I also learnt about a woman from the Madras YWCA, who did an internship in Geneva. In 1993 I met this Indian lady then 75 years old at the Madras YWCA.

These very first experiences revealed to me the worldwide solidarity of the YWCA family. Ecumenical belief was put into practice and disclosed to girls and young women the chances and possibilities of participating and playing an active part in society and politics.

I became a social worker at the Association for International Youth Work/Les amies de la jeune fille, working especially with migrants and refugees, as well as in the prevention of trafficking. In 2005, in cooperation with other women’s association, this association founded the now existing German YWCA.

In 1973 during a seminar “Women in Migration” I learnt about the work of the YWCA of Greece as well as of other European YWCAs. In 1975 I was sent for the first time as a delegate to the World Council in Vancouver. From 1979 to 1987 I served as a member of the World YWCA Executive Committee. As a European member of the World Executive Committee I was automatically also a member of the European YWCAs’ committee. As the youngest member in the group I helped to start the European Youth Conferences in Strasbourg over a period of five years.

The years at the World Executive Committee were not always easy, but apart from ecumenical English I learnt a lot about global relationship and how young women and the YWCA can benefit from this network.

I represented Y-interests at Bread for the World /EZE, as well as at the Women’s World Day of Prayer and the Protestant Women’s Work in Germany. When the YWCA work required a new structure in Germany, we founded the German YWCA as an independent women’s association, open for other associations and women interested in establishing contact with ecumenical and international women’s groups.

Up to now, we are only a small but active association. We receive strength for our work from being a part of the largest ecumenical women’s network, but also from personal encounters at the World Councils or through visits from other Y-women to the German YWCA, such as Nelly Hope Lukale from Kenya last month.